By borrowing and substituting chords from related scales and keys, you can open up near limitless options for crafting unique chord progressions.

You don’t have to only play the chords within a key to create a chord progression.

You can temporarily borrow chords from any other keys to add more uniqueness and colour to your progressions. Your only limit here is your creativity and what you believe sounds good.

Borrowing from the Parallel Key

Parallel Keys share the same tonic note, so you can borrow chords from one another without it sounding too jarring.

By doing so, you can add more variety and colour to your chord progressions. You can make your music sound a bit more tense, happier, sadder, or mysterious depending on the chords you borrow.

For example, let’s compare the chords in the keys of C Major, and C Minor (the Parallel Key of C Major).

Chords in the Key of C Major

Chords in the Key of C Minor

You can borrow any chord from the parallel key, but these are the most common:

For example, you can take a basic chord progression such as Cmaj – Fmaj – Gmaj, borrow the bVI (in this case Abmaj) from the minor key, and turn it into something like this:

In similar ways, you can also borrow chords from the Harmonic Minor and Melodic Minor scales that share the same tonic.

For example, let’s compare the Seventh Chords from each flavour of the Minor Scale.

You’ll notice that some chords are shared while others are quite different. A very common case is borrowing the V7 from either the Harmonic Minor or Melodic Minor scale to add tension to a minor key chord progression.

On the other hand, borrowing more exotic chords, such as the bIIImaj7#5 can lead to striking results!

For example, if we were in the key of C Minor, a normal 1-4-5 chord progression would be:

But if we were to borrow the V7 from the Harmonic Minor Scale, the progression would become:

Since the 7th interval is raised a semitone from the Natural Minor scale, this creates a unique set of chords to experiment with. Several of which do not exist naturally in Minor Keys.

When building chords from the Harmonic Minor scale, we use this pattern:

Using C Harmonic Minor as our example scale (C D Eb F G Ab B), we would get the following chords:

The Major 6th and Major 7th intervals of the Melodic Minor scale creates yet another unique set of chords.

For chords built from the Melodic Minor scale, we use this pattern:

Using C Melodic Minor as our example scale (C D Eb F G A B), we would get the following chords:

You can also borrow chords from any mode! In fact, you already do this when you’re borrowing chords from Parallel Keys.

Notice that each mode has a unique pattern of chords. In some cases they also contain chords that are not found anywhere else. These patterns and ‘character’ chords will give you the flavour of the mode.

Here are all the chords that you can borrow from each mode if using C as your tonic.

Then, if we wanted to give it a Lydian sound, we would borrow the F#m7b5 from the Lydian mode.

A secondary dominant is the dominant of any chord other than the tonic. They’re typically used to create more tension toward target chords and to lead the listener along in anticipation.

Let’s take an example. For a 1-4-5 chord progression in the key of C Major, we get these chords:

In this case, G Major is the ‘5’ and therefore the dominant chord of the tonic, C Major.

The D Major would be considered a Secondary Dominant because it is a dominant chord that is borrowed from another key.

In this particular case we would refer to it as the V/V (‘five of five’) because it is the ‘5’ chord of the ‘5’ chord in the original key.

Similar to borrowing chords from outside the key to add colour to your progressions, you can also use substitutions.

Replace any Major or Minor chord with a sus2 or sus4 chord sharing the same root note.

Replace the dominant chord with an augmented chord sharing the same root note.

Replace the dominant chord with a diminished chord sharing the same root note.

We can take what we’ve learned from Secondary Dominants and Chord Substitutions and apply it to a concept known as Tritone Substitution.

This is a common substitution in Jazz and provides a different flavour of tension as it creates a chromatic stepwise resolution back to the tonic.

Let’s take an example. In the key of C Major, a 2-5-1 progression would give us these chords:

G7 is the dominant here. If we counted 3 whole steps up from G we would find its tritone interval, which is Db. A dominant chord build on Db would be Db7 (with the notes Db – F – Ab – B).

Now we can use this chord to replace the G7 to give us this progression:

Notice how the root of each chord is separated by a semitone (D to Db, then Db to C) to give us stepwise resolution back to the tonic Cmaj7.

Substitute the V7 with a bII7:

Instead of counting 3 whole steps from the dominant chord, simply replace the V7 with the bII7 chord.

For example, in the key of C Major we know that the iim7 chord is Dm. So to get the bII7, flatten the root by a semitone and build a dominant chord to get to your Db7.

Lead into the Tonic with a Dominant Seventh One Semitone Above:

If you know your tonic (let’s take Cmaj7 again), the tritone substitution chord is a dominant seventh chord rooted one semitone above the tonic note.

So if you know you want to land on Cmaj7, simply lead into it with a Db7 (Db is 1 semitone above C).

Tritone Substitution in All Major Keys 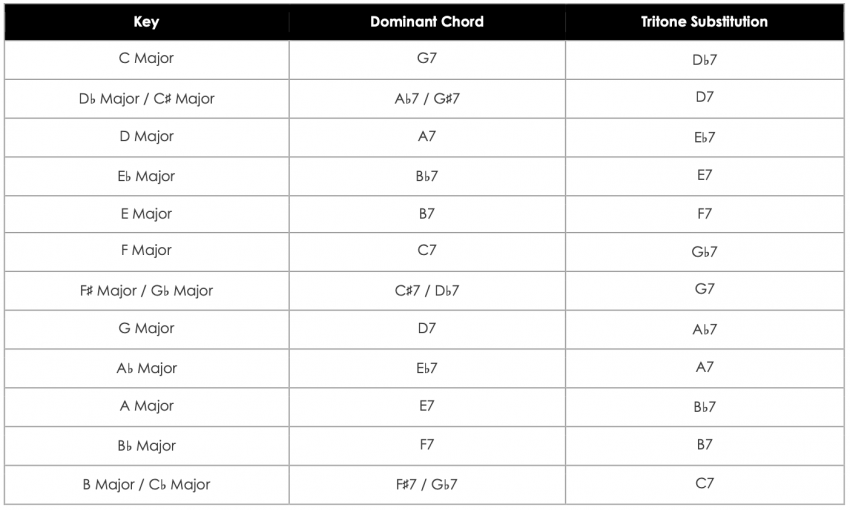 Usually you don’t want to emphasize these passing chords as they’re mainly meant to subtly support the main chords in your progression and not to become the centre of attention.

Any chord (diatonic or chromatic) can be used as a passing chord depending on whether you want the effect to be consonant or dissonant.

Since passing chords can be any chord, you have a lot of flexibility and creative freedom. However, we’ll cover a few common examples on the next few pages. We’ll stick with the key of C Major, but you can apply this to any key.

If two chords are separated by a whole step, you can insert a passing chord that is a semitone in between. This chord can be any quality (Major, Minor, Dominant, Suspended, etc.).

As a leading (or ‘approach’) chord, insert a diminished chord 1 semitone below your target Major or Minor chord.

If two chords are separated by a whole tone & the target chord is minor, insert a diminished chord 1 semitone in between.

If your target chord is Minor, insert a diminished chord with the same root note to add tension.

Precede any target Dominant Seventh chord with a diminished seventh chord one semitone above.

If your target chord is Major, insert an augmented chord with the same root note to add tension.

In Major Keys, precede the vi chord with an augmented chord that has the same root note as the tonic.