Chord progressions keep music flowing through tension & resolution. In this lesson, you’ll learn popular progressions to apply to your songwriting.

A chord progression is a set of chords that sound good when played in sequence with each other. They help create a sense of movement in a piece of music.

Remember that all Major Keys follow this pattern of chord tonality:

Looking at the table above, you can imagine the hundreds of possible chord progressions that can be made from just a few chords. You should experiment to find those that sound interesting to you, but you can also follow a few common progressions to use as a starting point.

Think of the chord progressions that follow as your fundamentals. They sound great as they are, but experiment with them by adding chords, removing chords, or replacing chords to create unique music!

The ‘One – Four – Five’ chord progression is very reliable and stable due to the strong attraction that the Subdominant (IV) and Dominant (V) chords have back to the Tonic (I). It is very popular in Rock music. 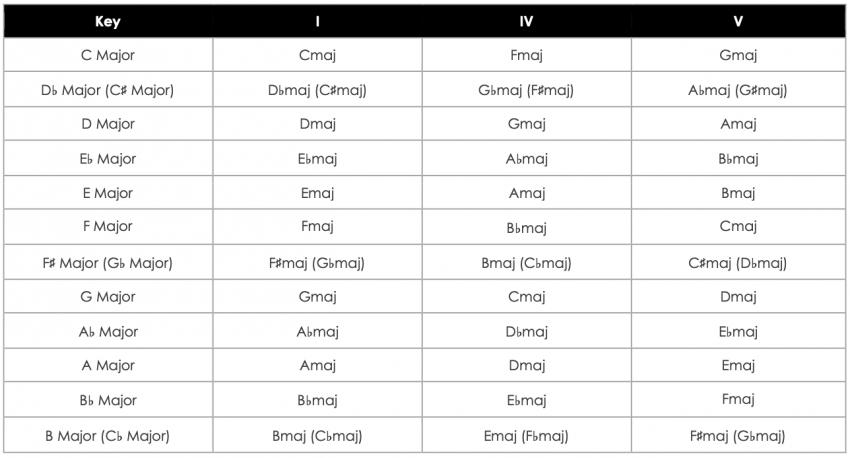 If you want to play the Blues, then this chord progression is essential. It is a sequence of 12 bars that contain the ‘One – Four – Five’ chords to advance the music. Often, blues players will use all Dominant chords to create a more tense and ‘bluesy’ feel.

You’ll notice that this pattern is repeatable for as long as you’d like. If you use a V7 as the ‘turnaround’ chord you can launch yourself right back into the beginning of the sequence. Or, if you’ve had enough you can end on the I7.

You can use the chords from the ‘I-IV-V’ progression above to build 12 Bar Blues progressions in all Major Keys.

Here it is in the key of C Major:

The ‘Two – Five – One’ progression is a staple in Jazz music. 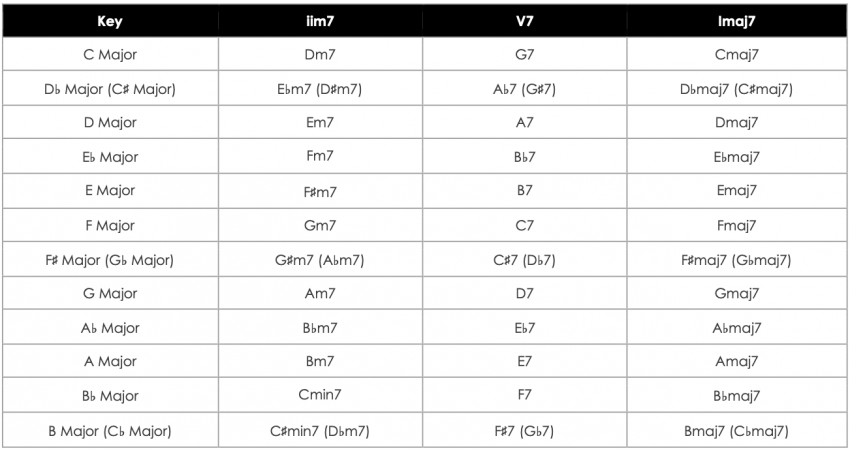 The ‘One – Five – Six – Four’ progression is massively popular in modern Pop music. 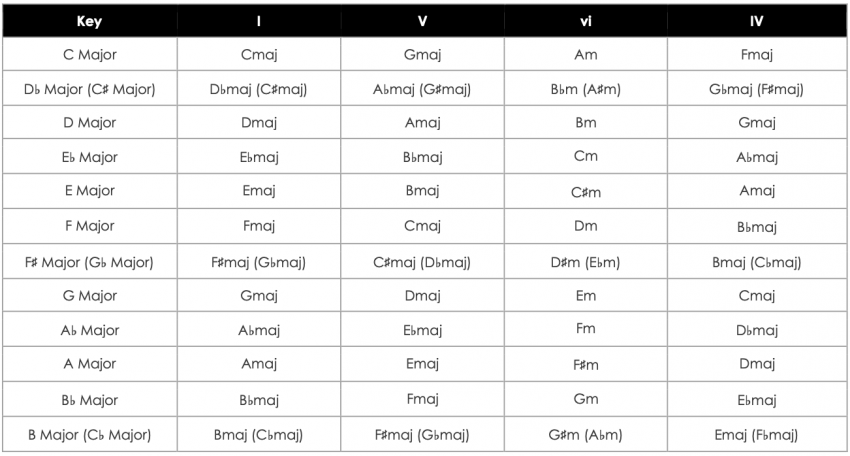 The ‘One – Six – Four – Five’ is also commonly known as the ’50s Progression’ because of its popularity in that era. 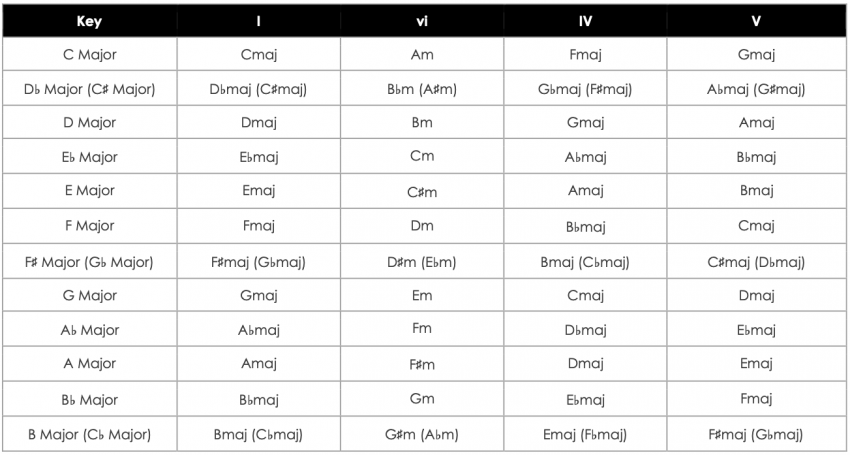 Also known as the ‘Canon’ because of its use in Baroque composer Johann Pachelbel’s Canon in D Major. 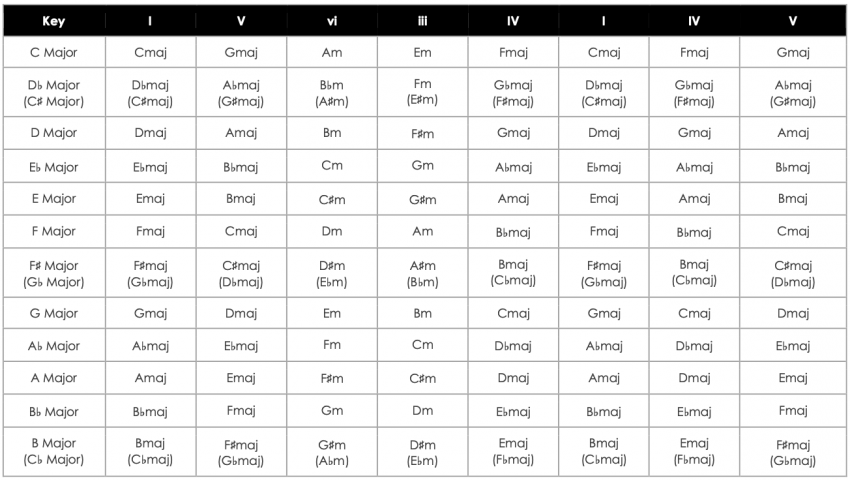 The ‘Andalusian Cadence’ originates from Flamenco music. What makes this progression unique is the Major
(often Dominant) III chord. Normally in Major keys, this chord would be Minor (iii). 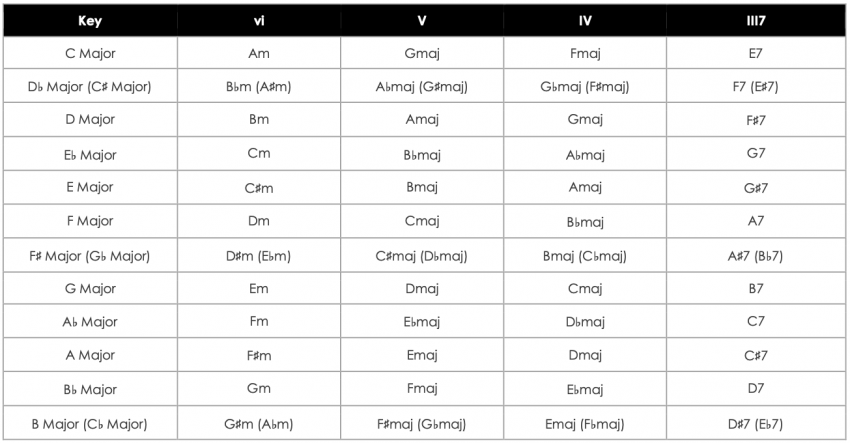 Remember that all Minor Keys follow this pattern of chords:

Chords in Minor Keys have similar functions as those in Major Keys, however the bVII chord functions as the Subtonic instead of the ‘Leading Tone’ as it is a whole step away from the tonic.

For the ‘v’ chord, borrow a Major V (or V7) chord from the Harmonic Minor scale for more tension to the tonic. 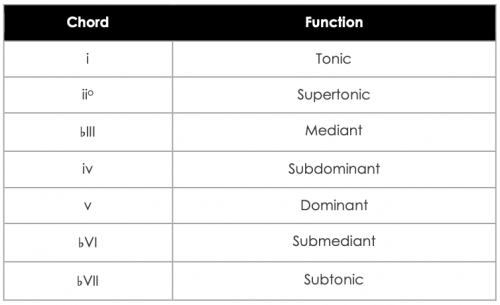 These popular Minor Key progressions are based on their Major Key counterparts. However, their tonality will be noticeably ‘sadder’ for that Minor feel.

Note: We’re substituting a major V chord from the Harmonic Minor scale for stronger tension back to the tonic. 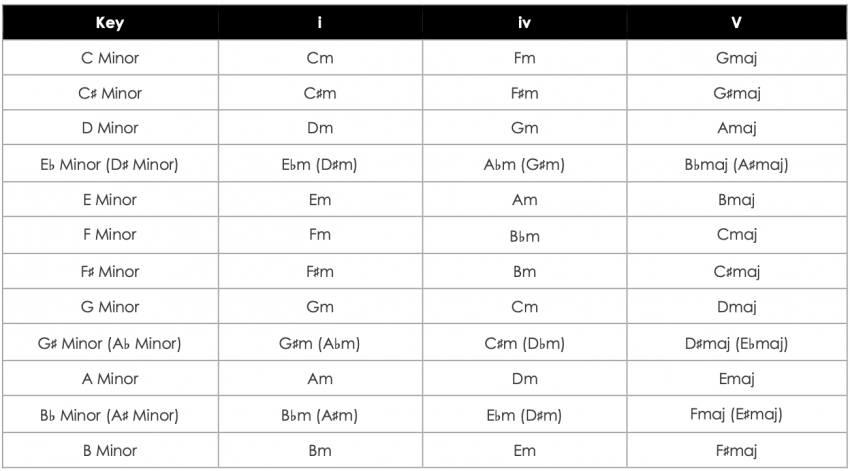 With Minor ‘Two – Five – One,’ substitute a dominant V7 chord from the Harmonic Minor scale for stronger tension. 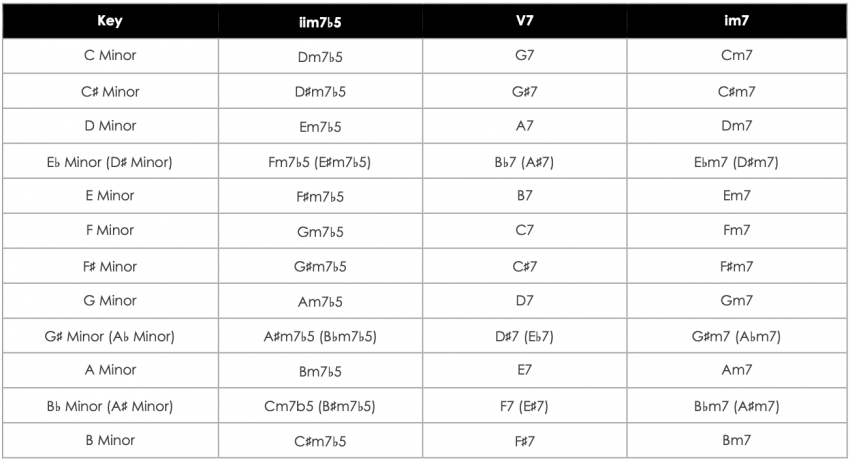 This is the Minor version of the ‘Pop’ chord progression. 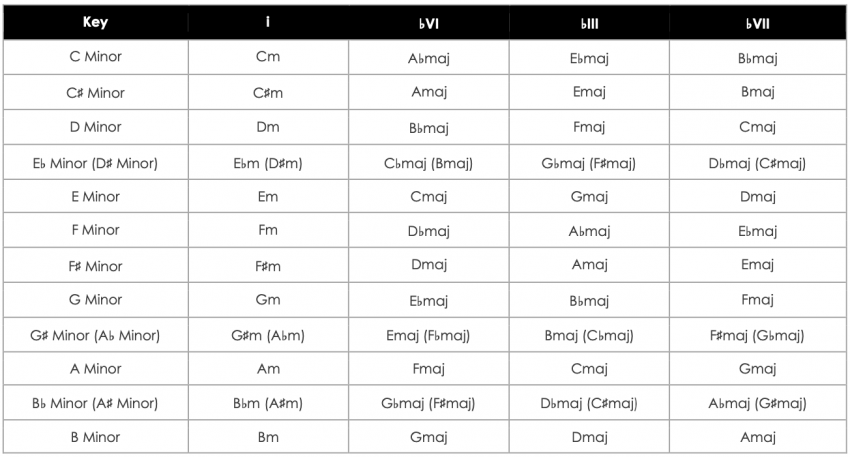 This is the Minor version of the ‘Andalusian Cadence.’ 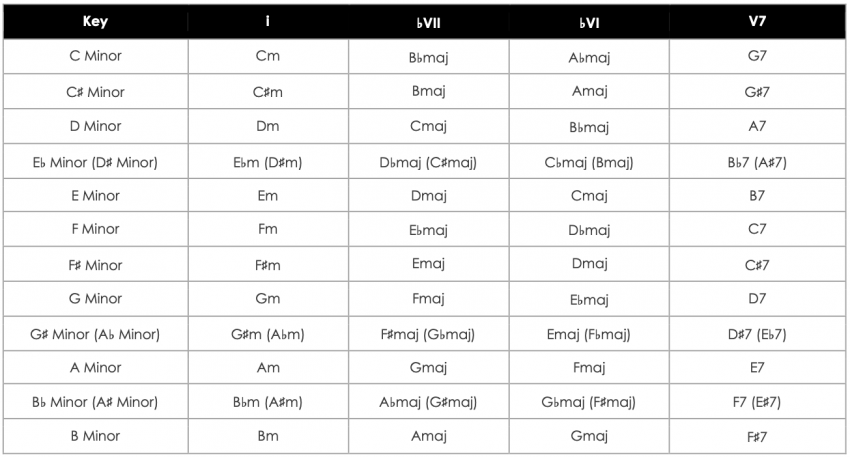 Cadences are sequences of 2 chords that serve to end a phrase or section of music. Their purpose is to either resolve the tension created from a chord progression by returning back to the Tonic (or ‘I’) chord, or to transition to another musical idea entirely.

A good way of thinking of cadences is that they are meant to provide a feeling of ‘release’ to musical tension.

There are 4 types of cadences. For our examples we’ll use triads in the key of C Major.

This cadence creates the most tension and ‘pull’ back to the Tonic (the ‘I’ chord) since it starts on the Dominant ‘V’ chord. The sound of the Authentic Cadence is definitive & clear, signaling that the phrase has ended.

This is also known as the ‘Amen Cadence’ because of its frequent use in Christian hymns. It is also useful to signal that the phrase has ended. However, it has a bit of a softer release in tension than the Authentic Cadence.

Half Cadence (Any Chord - V)

Unlike the Authentic and Plagal Cadences, the Half Cadence does not have a strong sense of release. In fact, it often leaves the listener with a feeling that the music should continue because the tension has not been resolved.

The secret to the Half Cadence is the V chord. You can play any chord (usually within the key but feel free to experiment!) before it, but ending a phrase on the V will leave the listener begging to hear more.

As you might guess by its name, this cadence ‘deceives’ the listener by not resolving to the Tonic (the ‘I’ chord) following the Dominant ‘V’ chord. This cadence can sound unexpected and surprising, and are a great way to add excitement to your music by continuing a musical idea where it otherwise would have concluded.

The V-vi is the most common Deceptive Cadence, however you can go from the V to any chord except the I to achieve a similar effect, sometimes with jarring results!

To create smooth sounding chord progressions, you can rearrange the notes in individual chords to retain common tones or minimize the distance between notes. This will help guide the listener’s ear from chord to chord naturally, without abrupt or jarring changes.

To take full advantage of voice leading you should be knowledgeable in chord inversions, chord voicings, and extensions.

For example, let’s take a 1-4-5 chord progression in the key of C Major:

If we play each of these chords as triads in their root position, we would get a progression of the following notes:

This chord progression will sound fine, but since there are no common tones between the chords, it won’t sound very smooth. Knowing what we do about chord inversions and extensions, let’s rearrange these chords to fix that.

Let’s start by keeping the C Major triad in its root position. However, for the F Major chord, let’s choose the second inversion instead. This way, the bass note ‘C’ stays the same between both chords.

For the next chord, instead of a G Major triad, let’s extend it to a G7 dominant chord so that we can use the ‘F’ note as the common tone from the F Major triad.

You can also rearrange chords so that their respective notes are separated by smaller intervals (such as a semitone or a whole tone) rather than awkward wide interval ‘jumps.’

In the example above, notice that if the C Major & F Major triads are in their root position, all of the notes between the chords are separated by perfect 4th intervals.

However, if we keep the C Major in its root position and use the F Major in its second inversion instead, the widest distance is only a major 2nd (between the notes G & A)!