Get started with the essential building blocks of music theory.  In this lesson, you’ll learn the basic intervals and scales that make up popular music.

Western music is based on the Chromatic Scale – a set of 12 notes that repeats in higher and lower octaves.

Notes that are sharp (♯) or flat (♭) have the same pitch, meaning they sound exactly the same. Those that are not sharp or flat are also known as natural (♮).

Double-sharp (𝄪) & double-flat (𝄫) notes are possible, but impractical in practice. For example, E𝄫 is the same pitch as D♮, so while they may be named differently in certain music theory uses, they sound the same.

An easy way to visualize these notes is with a piano keyboard. Each piano key has its own name. The white keys are natural notes. The black keys are sharp or flat notes, depending on the ‘key’ of the music.

Music is written using standard notation on a music staff. Each line & space on the staff represents a note.

The upper staff uses a Treble Clef to signify that the notes are higher pitch than those in the lower staff, which uses
a Bass Clef.

We’re not going to spend much time with standard notation in this lesson. Instead we’ll keep things simple with
note names.

However, here’s a quick reference for when you do encounter standard notation.

The distance between any two notes is called an interval.

The step between any adjacent note (such as C and C♯) is called a semitone or half-step. Two semitones is
called a whole tone or whole-step (such as C to D).

The name and quality of an interval depends on the distance from each other.

If you play C & C♯ at the same time on your instrument you’ll quickly notice it sounds unsettling or dissonant.

However, not every interval will sound dissonant. If we look at the distance between the notes C & G, we can count 7 semitones. This interval is a Perfect 5th. If the notes are played at the same time you’ll hear a stable and consonant sound.

The dissonance and consonance between intervals creates musical tension and resolution, which makes music interesting to listen to!

Intervals in a Single Octave 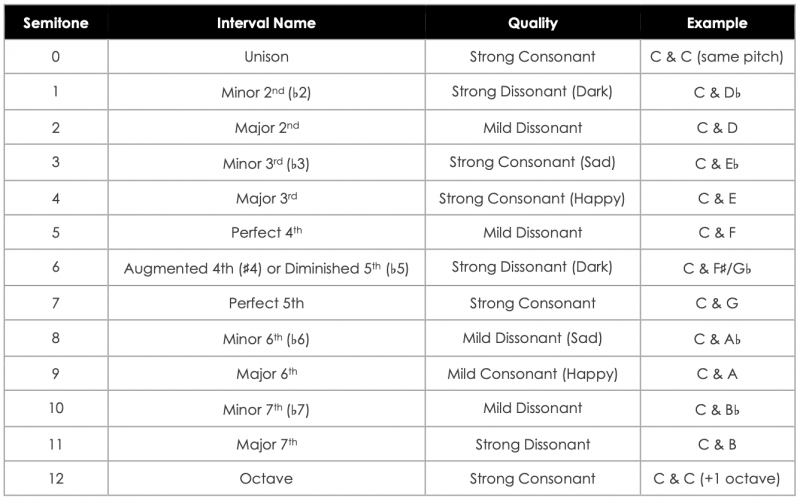 If you continue beyond a single octave, the notes of the Chromatic Scale repeat in a higher pitch.

Here you will find compound intervals that extend beyond 12 semitones from the Unison note.

These intervals are often used to add colour and embellishments to otherwise ‘normal’ sounding chords or phrases.

Here are the most common: 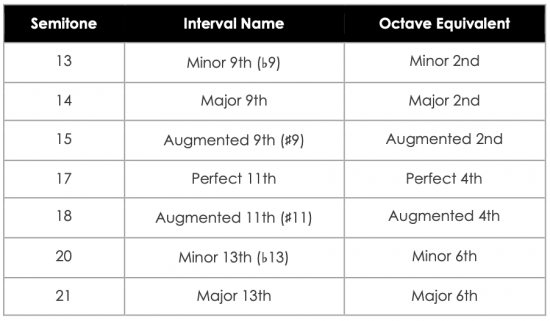 A set of intervals create a musical scale. Most consist of 7 notes. The most fundamental of them is called the Major Scale.

The Major Scale consists of these intervals:

We can also write out the Major Scale in a series of half-steps (semitones) and whole-steps (wholetones) as:

Major scales can be created by following this pattern starting from any note in the Chromatic Scale. For example, the C Major Scale consists of all natural notes (no sharps or flats) and is written as: C D E F G A B. 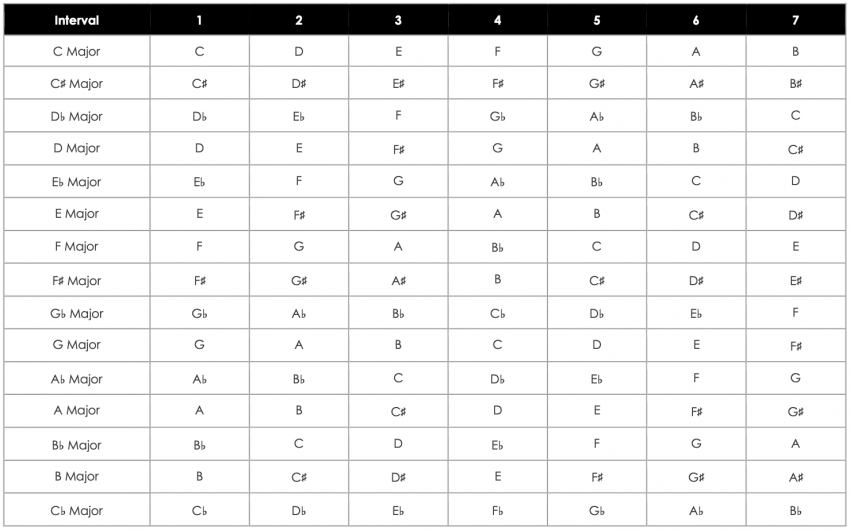 The Minor Scale is the ‘sad’ sounding counterpart to the ‘happy’ Major Scale. It is also known as the Natural Minor Scale.

We can write out the Minor Scale as a pattern of half-steps (semitones) and whole-steps (wholetones):

Using this pattern, let’s create the C Minor Scale. When building scales, we can only use each letter of the ‘musical alphabet’ once, so we end up with: C D E♭ F G A♭ B♭. 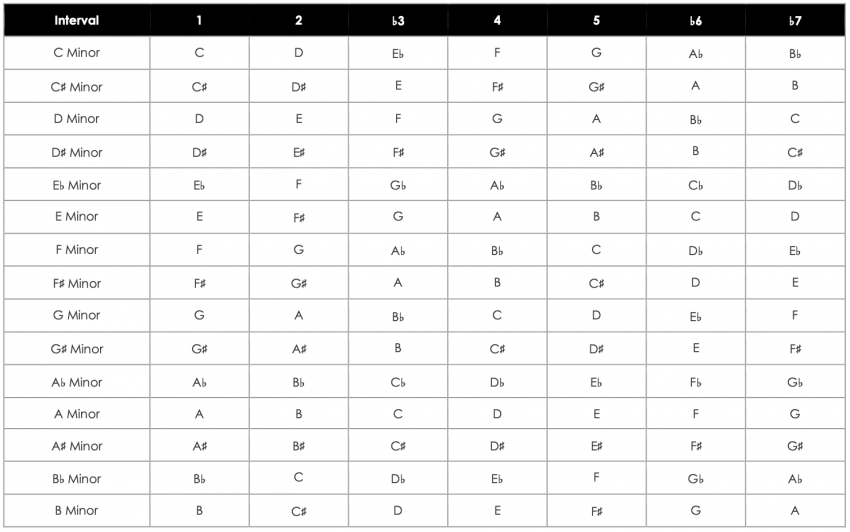 The Harmonic Minor Scale is an alteration of the Natural Minor Scale.

This is because the Natural Minor Scale has a weak sense of tension and resolution with the minor 7th interval
being a whole step away from the tonal centre of the scale (the tonic note).

Since the major 7th interval is only a semitone away from the tonic, the attraction is strong enough that the note
naturally ‘leads’ back to the tonic (also called a leading tone).

Below is a table of all the Harmonic Minor Scales. Watch out for double-sharp (𝄪) notes! The Major 7th interval of the scale results in these double-sharps when following music theory note naming rules.

In practical use, you can replace the double-sharp with the enharmonic equivalent (same pitch) note. For example, a C𝄪 note is the same pitch as D natural. 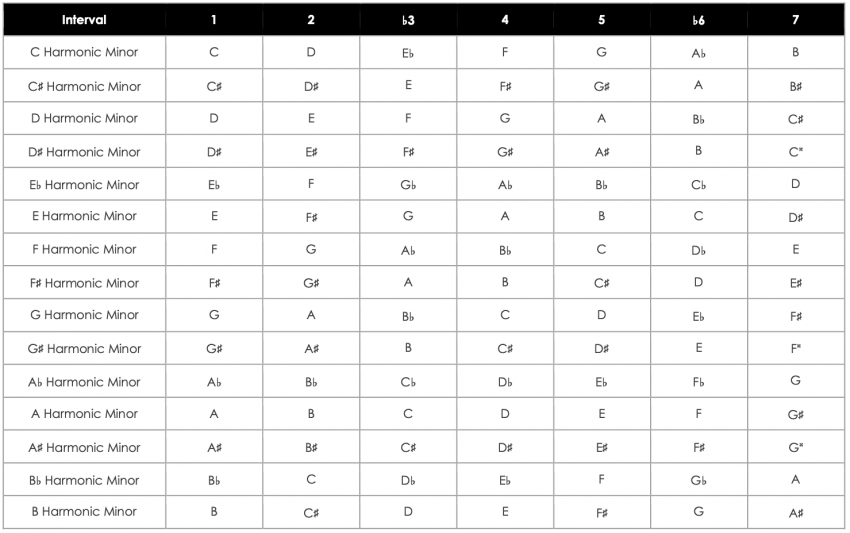 The Melodic Minor (Ascending) Scale is another alternation of the Natural Minor Scale that addresses two things:

However, the Melodic Minor also neutralizes the wide 3 semitone gap between the minor 6th and major 7th
intervals of the Harmonic Minor scale, which can sound ‘exotic’.

Compared to the C Natural Minor Scale (C D E♭ F G A♭ B♭), C Melodic Minor would have the notes C D E♭ F G A B. Notice that both the A♭ & B♭ are raised by 1 semitone.

Since the Melodic Minor scale has a Major 7th interval as in the Harmonic Minor Scale, remember to watch out again for double-sharp (𝄪) notes. 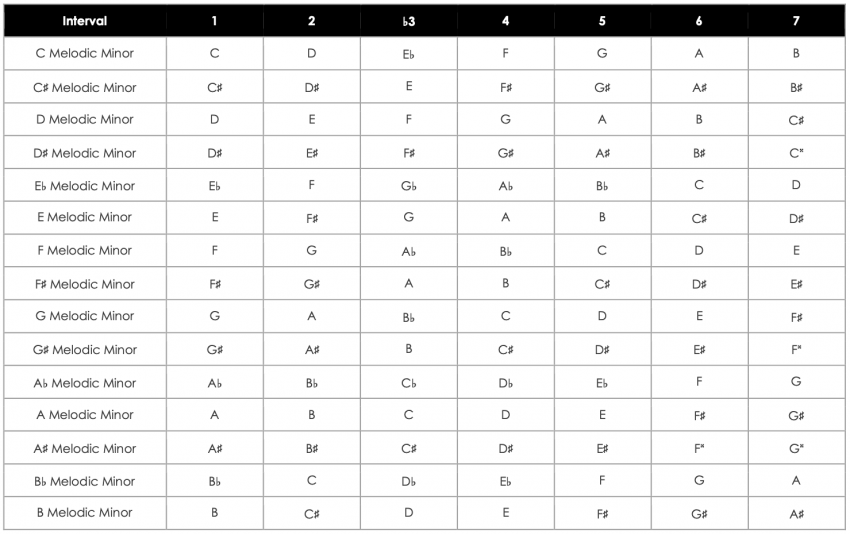